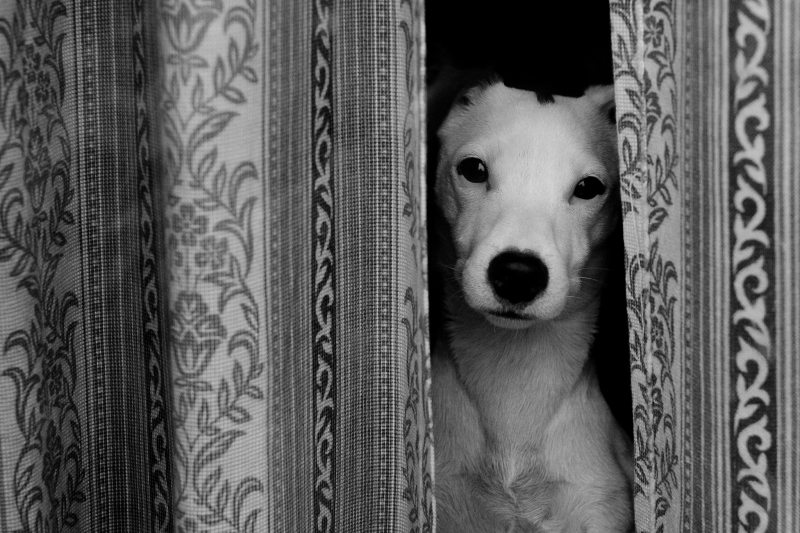 Here is a little introduction to Poppy who is not only my dog but also the Poppy-n-Pals mascot.

Poppy is a short leg Jack Russell Terrier, she is 2 years and 3 months old (born April 1st – April fool). I might be a little bit biased but she is an absolutely gorgeous dog, with a wonderful temperament and is incredibly clever. She definately trains us, instead of the other way around.  Poppy is a typical Jack Russell, she lives life to the max (except in the morning when she likes to lounge in our bed).

Her favourite things are going for long walks, she loves the beach and running through long grass. 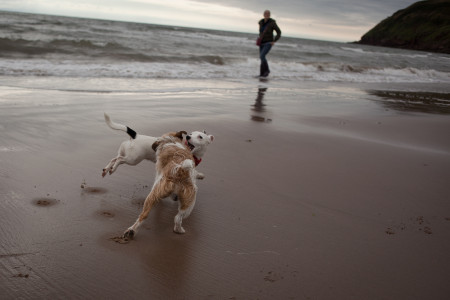 Poppy playing at the beach with her Cumbrian friend Pushkin.

She also loves playing fetch with a tennis ball and she is quite skilled at playing football. As a puppy Poppy had a lot of training, we always tried to stick to the rule of 5 minutes a day. Poppy has become somewhat of a trick dog, she knows all the basics, Sit, Down, Come, Stay and Leave and she also knows things like Stand (on hind legs), Spin, Roll Over, Touch, High Five and Play Dead. It is a blessing that she is very treat motivated and so picks things up very quickly, sometimes too quickly. Poppy when she was being toilet trained learnt that if she went into the garden to wee she would be rewarded with praise and a treat, as soon as she realised this she would go into the garden and squat but not wee then look at us as if to say ‘where is my treat?’. This has now progressed, if on a walk she smells something yummy, or more often disgusting she will squat as if weeing next to it so that she can sniff/eat it. You see what I mean about she has trained us! 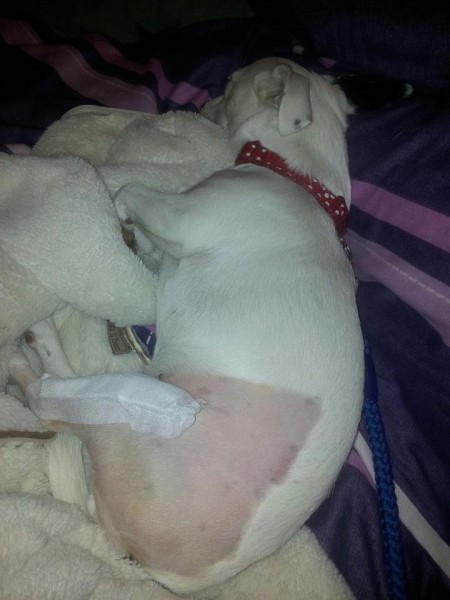 Poppy after her first lot of surgery for her Luxating Patella.

Poppy has a problem with her back legs called Luxating Patella. This means that her knee comes out of the joint. LP has different severities ranging from the knee only coming out of the joint if forced and the knee staying out of the joint permanantly. Poppy recently had to have corrective surgery for the LP in her back left leg as it was at the stage where the knee would come out of joint by itself when she was walking. We noticed this because she often held her leg up on walks, we now know that in holding the leg up she was popping the knee back in to the joint. It has been 5 months since Poppy had her first lot of surgery where they put a couple of pins in the knee to hold it in place. Poppy is a slow healer and so instead of taking the usual 6-10 weeks to heal she took 5 months. Unfortunately the pins that were put in her leg started to rub on her ligament so on the 26th June 2013 she went back to hospital to have them removed, this is possible because all of the tissue and muscle has healed up enough around the knee to hold it in place without the need for the pins. So Poppy is now at home feeling rather sorry for herself after what we hope will be her last bit of surgery for a very long time.

Before Poppy had this last lot of surgery she was at a stage where she was able to start spending time with dogs again, another of her favourite things. Here are some photos of Poppy spending some time with her new friends. Poppy met the wonderful Buddy and Topsy on a great forum called Love Jack Russells. It is a website all about Jack and Parson Russell Terriers, have a look as they welcome everyone whether you have Terriers or no pets at all.